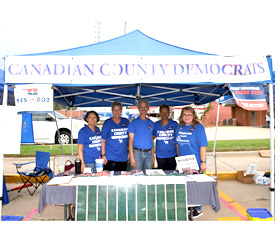 YUKON, Okla. – Public education was the top issue at Czech Festival, earning 27.4 percent to the votes cast, according to an informal issue poll taken by the Canadian County Democrats.

Hundreds of visitors stopped by the Democrats’ booth on October 5 to drop pinto beans into 11 slots separated by Plexiglas known as the “bean poll.”

“We make the poll fun and encourage adults and kids to vote for the issues that matter most to them,” Canadian County Democrats Vice Chair Dennis Purifoy said.

“The Canadian County Democrats also registered 25 voters and collected hundreds of signatures on a petition designed to expand healthcare, save rural hospitals, create new healthcare jobs and get nearly $1 billion in federal dollars returned to Oklahoma to save thousands lives in Oklahoma each year.”

Climate change earned the second most votes in the opinion poll with 12.6 percent, followed by a tie for third place between veterans services and gun violence prevention, both with 12.1 percent.

Lesbian/gay/bisexual/transgender/queer rights received 8.5 percent of the votes, while access to birth control got 5.3.

Other issues in the poll included a tie between Medicare/Social Security and equal pay/minimum wage increase, both with 4.7 percent, and a three-way tie between Medicaid expansion, roads/bridges/public transit and immigration reform with each earning 4.2 percent.

“Our booth was busy all day, which proves, I guess, that people like to be asked for their opinions,” Canadian County Democrats Secretary Shirley Burton said. “Plus people kept coming up to the booth asking to sign the Medicaid expansion petition. It was a great day for us.”

The Canadian County Democrats meet at 7 p.m. on the second Monday of each month, except December, at the Yukon Police Department, 100 S. Ranchwood Boulevard. Cassi Peters, founder and partner at Skyfire Media, will speak October 14 about best practices when running for office or helping with campaigns.