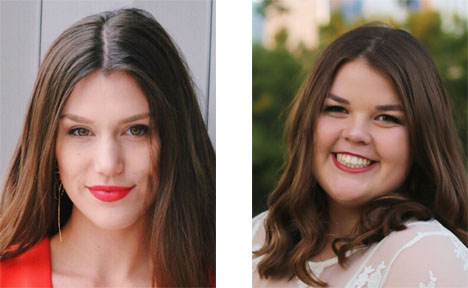 Normally, the Canadian County Democrats select only one scholarship winner each year. However, this year a generous donation from Mark and Laurie Hammons from Yukon enabled both Simon and Madilyn to receive the awards.

The Robert “Bob” Burton Democrat Scholarship is named in honor of the deceased former county vice chair who encouraged young Democrats to become active in the Democratic Party.

Canadian County Democrats Secretary Shirley Burton chairs the scholarship committee with Vice Chair Dennis Purifoy and Laurie Hammons. Burton is the widow of Robert “Bob” Burton for whom the scholarship is named.

This is the 12th year that the Democrats have given scholarships.

“I have a fierce desire to help others in any way I can,” Simon wrote in an email summarizing her background. “I hope to one day to open my own audiology clinic and take part in the cochlear implantation process by programming the implants for patients, allowing to hear for the first time.”

Simon’s desire to enter the doctorate program in audiology stems from her family’s experience in medical settings such as hospitals and doctors’ offices. Her father is three-time organ transplant recipient who is currently on the transplant list.

“The thought that I could give someone back the hearing they lost, or help them to hear for the very first time, gives me the hope that someday I could make a difference ins someone’s life just as the doctors who saved my dad’s life made in mine,” Simon wrote in her scholarship application.

In explaining why she is a Democrat, Simon wrote, “When I think of a Democrat, I think of a person who puts the well-being of others, or the whole, before the betterment of themselves. For example, this is demonstrated through their strong opposition to cutting social services, such as Medicaid and Social Security, as well as the many social justice issues they stand for.”

Madilyn Dunn graduated from Yukon High School in May and plans to major in education at Oklahoma State University in the fall. An active volunteer who served more than 200 hours this year, she participated in Student Council, varsity Academic Team, National Honor Society, Youth City Council of Oklahoma City and paged for the Oklahoma House of Representatives.

“I am Democrat because I believe in a system of government for the whole population….” Dunn wrote in her scholarship application. “I want to advocate for change…. I believe in more individual freedom of choice that no one can take away from you.”

“I have a goal of one day being a part of the Oklahoma House of Representatives or Oklahoma Senate,” Dunn added. “This is because I have a desire to serve others.”

In a reference letter, Kristy Cooper, Oklahoma Association of Student Councils Advanced Leadership Workshop advisor, commended Dunn for her role as a group leader at the organization’s district convention in April.

“… Madilyn took charge like a teacher who has been teaching for years. And not many teachers could control that many (200) students at the same time, but she did,” Cooper wrote. “Madilyn is a strong and natural leader, and her peers listen when she speaks.”

The Canadian County Democrats meet at 7 p.m. on the second Monday of each month except December at the Yukon Police Department, 100 S. Ranchwood Boulevard. The group is actively recruiting Young Democrats. For more information, visit www.canadiancodems.org or phone 405-326-3600.