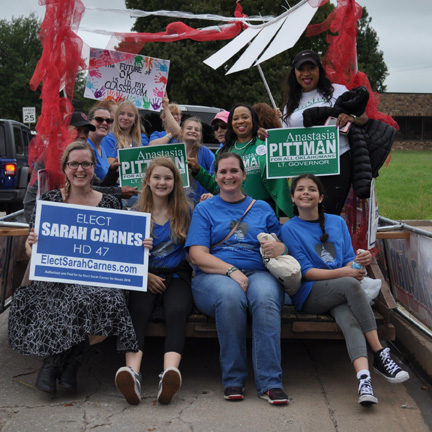 YUKON, Okla. – Teacher pay was by far the top concern for 35 percent of Mustang’s Western Days visitors, according to an informal issue poll taken by the Canadian County Democrats on September 9 at their booth at Wild Horse Park in Mustang.

Hundreds of visitors stopped by the organization’s booth to drop pinto beans into 11 slots separated by Plexiglas.

“People seem to love our ‘Bean Poll’ – that’s what we call it,” Canadian County Democrats Secretary Shirley Burton said. “Adults and kids come by our booth to vote, and it often gets them talking about what matters most to them.”

The second most popular issue in the opinion poll was mental healthcare at 17 percent followed in Oklahoma budget at 12 percent.

The issues were chosen by Mustang High School students for a voter registration drive last spring and remained in place on the “Bean Poll” for Western Days.

The Canadian County Democrats meet at 7 p.m. on the second Monday of each month, except December, at the Yukon Police Department, 100 S. Ranchwood Boulevard.  All Democrats are welcome.  For more information, phone 405- 326-3600, check out Facebook @canadiancountydems