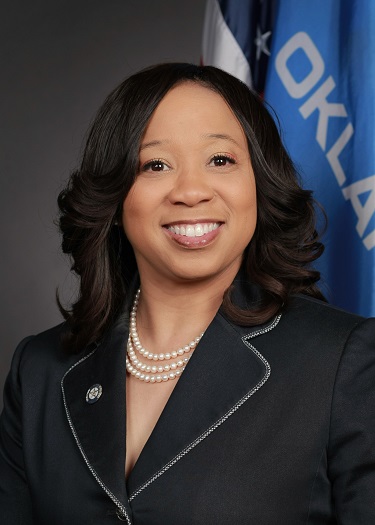 YUKON, Okla. – Democrats are invited to hear state Senator Anastasia Pittman speak to the Canadian County Democrats and friends on Monday, May 14.

Senator Pittman is running for Lieutenant Governor of the state of Oklahoma.

Seating is available on a first come, first basis for the free meeting held from 7 to 8:30 p.m. at the Yukon Police Department, 100 S. Ranchwood.

Senator Pittman was previously elected in District 99 of the House of Representatives in November 2006.
She is the former chair of the Oklahoma Legislative Black Caucus and Oklahoma Native American Caucus and served as Democratic Whip.
Senator Pittman earned a bachelor’s degree in journalism and public relations from the University of Oklahoma, and a master’s degree in Urban Education and Behavioral Science from Langston University.
She has received numerous honors and awards including Honorary Tuskegee Airman of the Charles B. Hall Chapter, Honorary Buffalo Soldier, the Oklahoma Achiever under 40 Award, Outstanding Community Service Recognition for Magic Star Foundation from former President Bill Clinton and the Media Advocacy Award from the Oklahoma Coalition Against Domestic Violence and Sexual Assault.
Senator Pittman is married and has one daughter, one foster son, and three step- children.